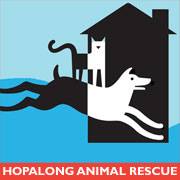 Hopalong became a strong lobbyist that no animal should leave the organization without being fixed, eventually convincing the cities of Oakland and in Berkeley to pass spay/neuter ordinances to reduce pet-overpopulation. Without effective spay/neuter programs for the public, there would be no way to stem the tide of pet overpopulation.

In 2005, Hopalong became an active partner in the Last Litter Project in Oakland, a collaborative to provide free spay/neuter to those who can’t otherwise afford it.

Hopalong Animal Rescue has grown from a one-woman effort to a paid staff of six. Together with a large number of dedicated volunteers and donors, we are working toward our dream that no adoptable animal is euthanized in our community

In 2006, Hopalong Animal Rescue and Second Chance Rescue formally merged after many years of working together. We share the same philosophy, mission and love of animals.

We now offer rescue, placement, prevention and outreach programs to the community throughout the Bay Area, as well as Sonoma and Napa counties.

Hopalong rescues, rehabilitates and rehomes over 1000 shelter dogs and cats each year. We are the largest 100% foster based rescue group in the Bay Area, and have rescued 28,000 shelter animals on euthanasia lists for the past 25 years.