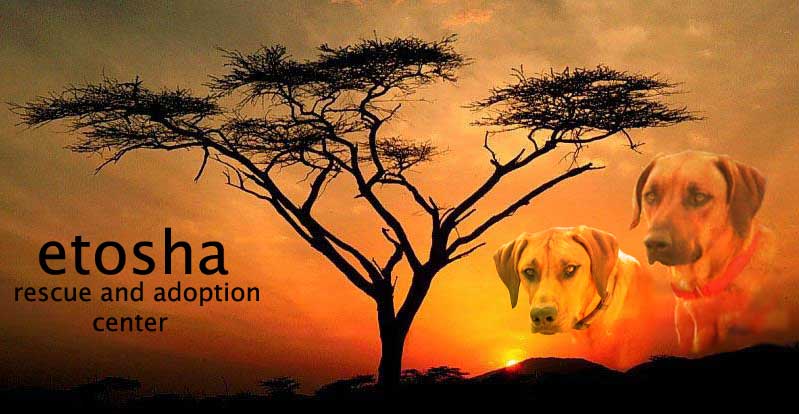 Etosha was named after a salt pan and wildlife preserve located near Namibia, South Africa. Our founding director chose the name to honor her first love since childhood -- a Rhodesian Ridgeback, whose origins are So. African. Once considered rare, the Ridgeback is now a popular companion for many Americans and, unfortunately, also a target for unethical breeders and puppy mills. Texas currently has eight Ridgeback puppy mills that we're aware of, more backyard breeders than any other state, and tops the list for the highest number of purebred Ridgebacks in rescue. Etosha saves and finds homes for hundreds of Ridgebacks every year.

Etosha was established in 1988 as a sanctuary for homeless Ridgebacks, Greyhounds, Mastiffs, Great Danes, abandoned hunting dogs and other large breeds. In 1990, Etosha became an all-breed 501c3 rescue that accepted mixed breeds, domestic cats, and exotics such as ferrets and guinea pigs. We also occasionally rescue injured or orphaned rabbits, deer, raccoons, birds and farm animals. Wildlife is returned to its natural habitat or transferred to other sanctuaries as soon as possible and farm animals are eventually moved to other, more appropriate facilities as well.

Our mission is to rescue, rehabilitate and find the best homes available for our dogs and cats. Adoptable pets are spayed or neutered, vaccinated, micro-chipped and free of disease (including heartworms) prior to adoption. Dogs receive basic obedience training as well as socialization through the Etosha Foster Care Program. We promote state-wide educational events which focus on the importance of spaying or neutering, humane treatment for all animals, and workshops to teach children the basics of responsible pet ownership. Etosha is dedicated to maintaining a high success rate (about ninety-five percent) for placing companion animals in forever homes. We achieve this by carefully screening prospective adopters and knowing which dogs or cats are most likely to be a good match for them.